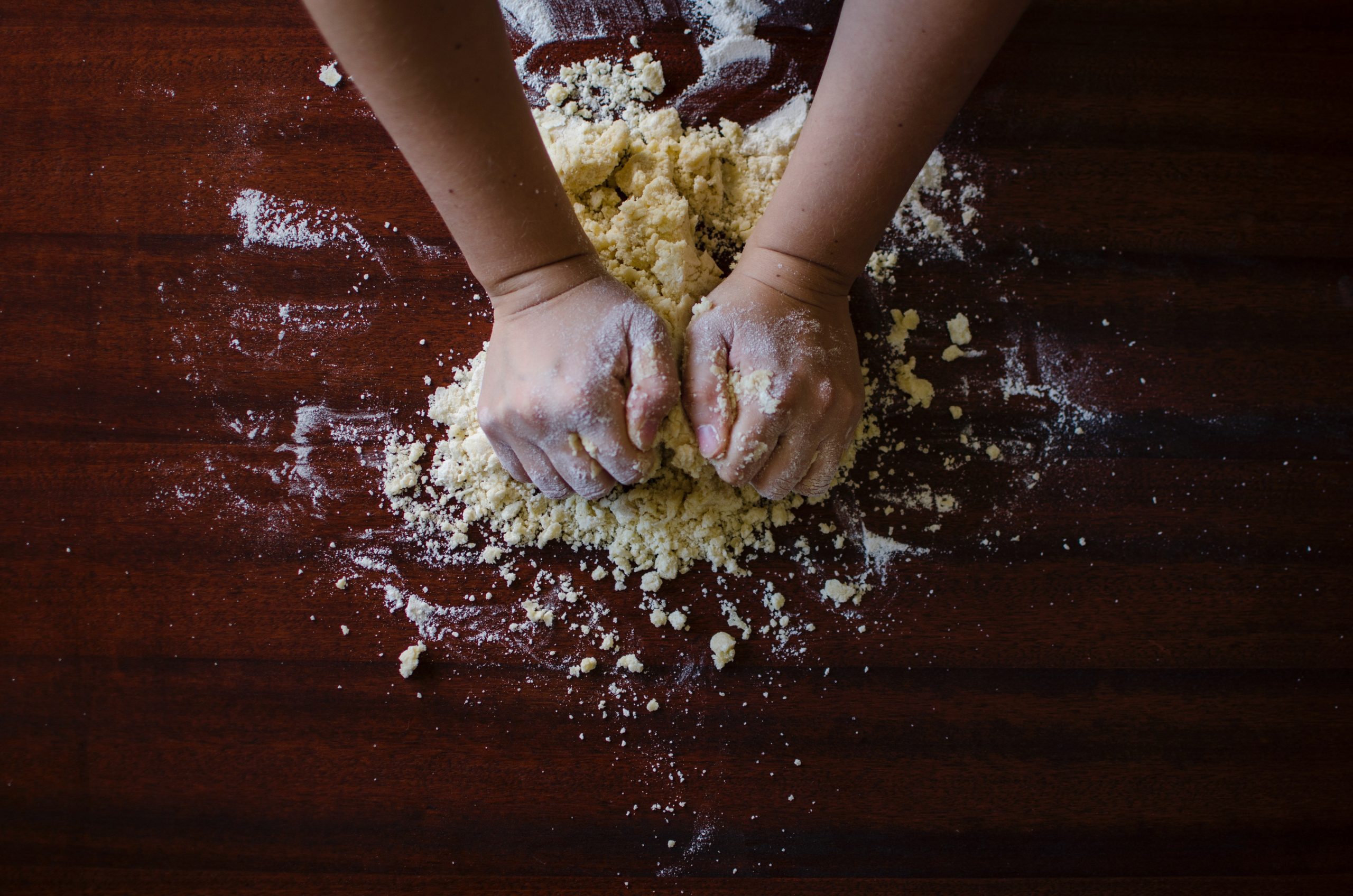 Photo by Life Of Pix from Pexels

During the first year, I took up making bread from scratch.  I bought glossy, coffee table recipe books

with beautiful photos of freeform artisan breads, out-of-print books with healthy recipes requiring obscure ingredients, and fat paperbacks chock full of variety that became well-worn. I bought a pizza stone, a pizza peel, loaf pans in an array of sizes, serrated knifes and a countertop slicing guide. I experimented with flatbreads, made dinner rolls and cinnamon rolls and bagels. I made bread every day. It kept me occupied. And in looking back, I can see that it was also about my family, about breaking bread together and all that means.

I tried a bread machine with a kneading function, but it wasn’t the same. There was something therapeutic in the hands-on approach. As I kneaded, working up a sweat and toning my arms in the process, the dough became stretchy and strong.  I could feel the gluten strands doing their magic in the way the dough held together, smooth and soft, tough yet pliant. I could see that too, in the little “windows” that revealed themselves in stretched-thin dough that didn’t break.

I learned about the need for moisture in the oven and what a difference a few degrees of heat can make. I learned how yeast functions, too.  Even with the scientific knowledge, leaving a small, smooth ball in an oiled bowl, and returning later to find a puffy pillow, doubled or tripled in size was nothing short of a miracle to me. And each time I punched it down, it would rise again, resilient.

The toughest lesson was the need to wait. While the air swirled with the scent of fresh baked yeast bread, patience was essential. Hot loaves crush rather than properly slice.

My favorite recipe was one that made my family happy. It added bits of cold butter and powdered milk to the dough. The bread required longer kneading, and a third rising period that brought it spilling over the bowl. All that beating and punching down, yet it rose ever higher—the finished loaf as light and fluffy as a cloud, yet also strong.

As I would knead that dough, I sometimes imagined it a bit like me. My son’s estrangement had me emotionally rolled, twisted, and flattened. Punched down and left on a shelf. And like the gluten in that dough, I imagined the strands of my soul growing stronger, more flexible, and holding together. I could take an emotional kneading, a punching down, and be resilient like that bread dough rising yet another time. As the years have passed, I have found this to be true.

In my daily life, I am tough like that dough. Pliant and flexible and holding together.  On some days, I’m even as light and airy as the finished product.

You can be resilient too

Thousands of parents have read Done With The Crying

and found it informative and empowering. I think you will, too. It’s chock full of ingredients to help.

Adult child won’t talk to me: Is it time to go with the flow?

Adult child won’t talk to me: When the world is scary, bend and twist 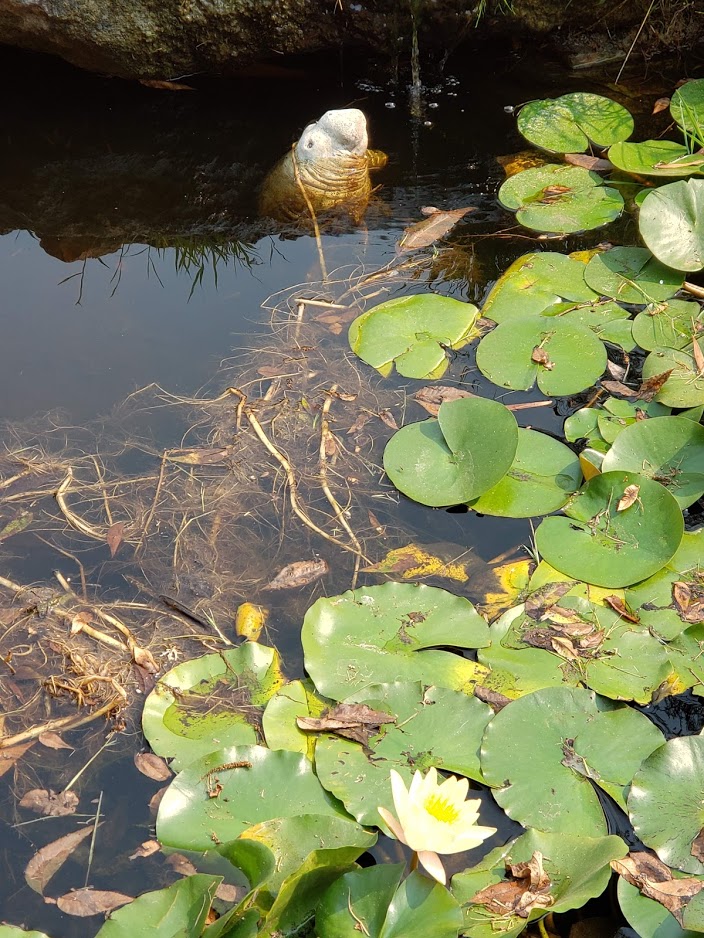 Abandoned parents’ reflections: Are you chewing?

I’ve been gradually moving over the last several months, to a new home far away from the one where my husband and I raised our kids. On my most recent return to the blazing Southern California heat after a week away, I discovered that my little man-made pond had evaporated by half. And there, among the tangle of lily pads was an old friend: a plastic manatee I’d forgotten even existed had popped up from the depths.

Seeing its emergence from where it had somehow been buried beneath the surface, made me think of an old Simon & Garfunkel tune. The song starts out, “Hello Darkness, my old friend; I’ve come to talk with you again.” Those lyrics remind me of the way emotional pain can pop up and imprison abandoned parents in a looping reel of dark thinking. But is it wise to make an “old friend” of the stuff?  When there’s no solution to a problem you keep going over and over and over, you’re ruminating. That sort of repetitive thinking carries the negative side effects of anxiety and depression.

The word “ruminate” derives from a centuries old Latin variant that means to “chew the cud.” This makes sense because “rumen” is the English word for the first of four stomachs found in animals that chew a cud. Multiple stomachs help cows and other ruminant animals to break down their diet of coarse grass. There’s a purpose to the process, which is the opposite of chewing the same old emotionally draining cud. That kind of chewing gets you nowhere.

A previous article covered the weepy days common to abandoned parents and how they can use them for good. Here, let’s look at your emotional cud from a new angle. Like Simon & Garfunkel’s old friend, darkness, has your rumination grown so familiar that it’s become a companion?

In the distress and uncertainty of an adult child’s rejection, ruminating can become a habit, and even bad habits are something we can count on when our world has gone topsy-turvy. If you’re in the habit of thinking negatively—when you’re trying to get to sleep, whenever friends talk about family fun, wherever you see grandparents with grandchildren, or there’s some other trigger that sets you off—maybe it’s time to recognize rumination for what it is, an emotional rut, and bid the old buddy good-bye.

One of the first steps to letting go is recognizing when you’re holding on. That means noticing when your thoughts turn down that familiar alley. In Done With The Crying

, there is detailed material toward recognizing and measuring how often dark thinking plagues you. Awareness is necessary to begin the practice of consciously letting rumination go.

It’s normal for our minds to want to chew on things that trouble us, but at some point, we must realize the cud is just old grass. As time passes, and with work that builds happiness, confidence, and fulfillment despite the pain, you can make sweet milk of your life despite estrangement. Even then, like an old wound that only bothers you in bad weather or when you’re tired or ill, the old cud of estrangement pain can pop up. Then what?

Seeing that manatee brought a spill of memories. After my son cut us off, building beauty in my garden became my therapy. Clearing weeds helped clear my head. Tending to things that bloomed helped me to bloom. Seeing the cycle of life echoed in plants and trees helped me see myself in new and resilient ways. But spotting that manatee rising from the depths where it had been caught and lurking brought back pain.

I sat on the garden wall, remembering how I’d worked my hands until they were as rough as sandpaper. In my vegetable garden, I had looked up with hope if a passing car sounded like my estranged son’s, and then hung my head and went back to my work. I remember uncovering ugly grubs in the soil and getting tricked by Fool’s Lettuce. That insidious weed sprouted as tender and soft as the sweet greens I’d planted, and eventually took the whole bed over, complete with thorny edges and thick roots that made the imposter impossible to pull. And, right or wrong, I found parallels in my son and those he’d chosen to go off with. Appearances can be deceiving. Those parallels were helpful to me at the time. 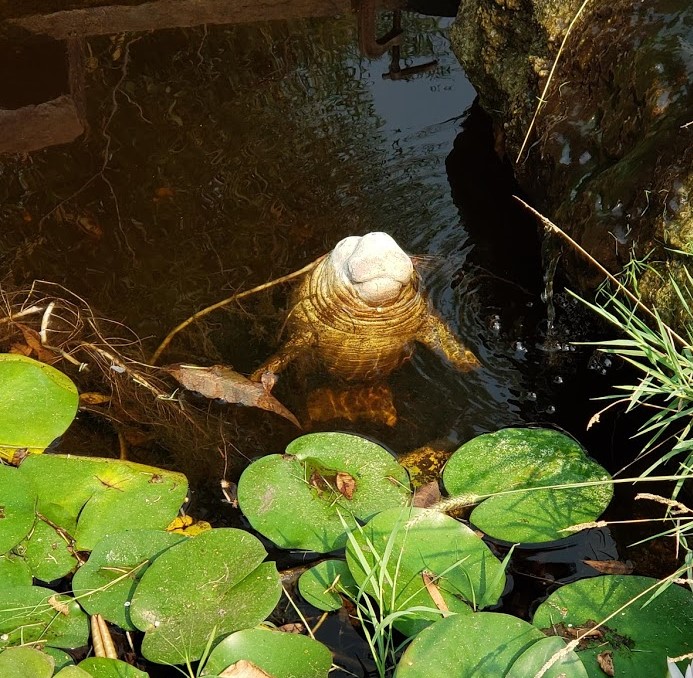 Tired from the long drive, as I sat on the garden wall, a misting of tears surprised me. The cute manatee had popped up from the depths, an old friend who tugged at memories and pain. I took a breath. The sky was still and blue. A mockingbird shouted an alarm call to guard its nearby nest. A trail of ants hugged the garden wall near my feet. Life moved on. That painful time was over. I was here and now. I didn’t need to chew the cud or talk with the darkness that was no longer my old friend.

Bobbing lightly in the pond fountain’s trickle, the manatee seemed to smile. I smiled too.