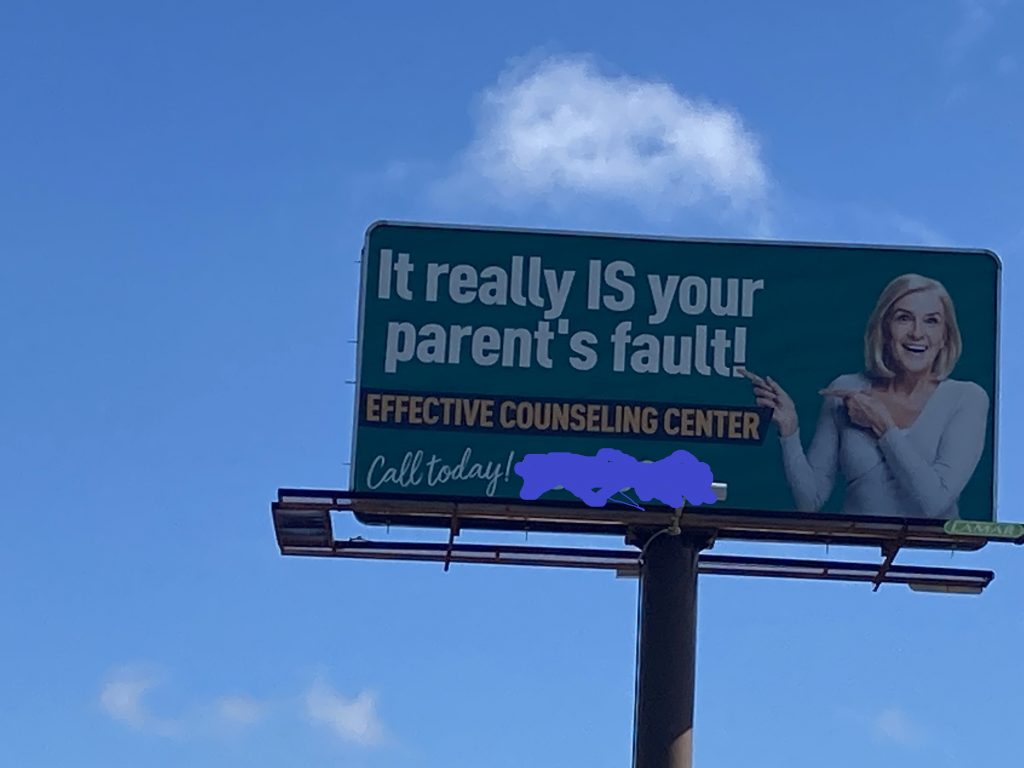 Heartbroken parents: Are you to blame for your adult children’s problems (or estrangement)?

To a heartbroken parent driving to a neighboring town in the U.S., the message of this billboard hit like a punch in the gut. The “effective counseling” it advertises comes across as one-sided and pandering. This can’t be healthy (can it?).

Thousands of heartbroken parents tell me their adult children blame them for their every problem. Yet even I was shocked at this billboard. It’s a bald-faced presentation of something I also hear often: That, when it comes to family estrangement (and more specifically, parent-and-adult-child estrangement) our culture, and even some therapists, are part of the problem.

“We live in crazy times,” said the mother who saw this offensive billboard a few weeks ago. She hasn’t spoken to her son in four years, nor seen the sweet grandchild with whom she’d previously bonded. She isn’t the only heartbroken parent to conclude, “Society is supporting these adult children to reject us parents.”

When people have issues, they are frequently advised to find the root. Uncovering the beginnings of unhealthy emotional habits, ways of thinking, and managing our lives can be a positive start. However, too often, the root leads rather simplistically to parents. A few examples:

There can be truth in these, but when an adult stops there, looks for proving evidence and embellishes, or is advised to cut off relationships rather than try to dig deeper, understand or empathize, they no longer grow. In blaming parents, they can excuse themselves—and they’ll find many to echo the blame. Just as peddlers of hope can keep parents who did their best stuck apologizing and forever trying to reconnect, there are mentors of blame. They preach to a choir of adults who refuse responsibility for their own bad decisions with their resulting consequences and hold their parents accountable instead.

Parent-blaming can be subtle or direct

Often, a grabber headline misleads, like for the article I wrote about here: Are a parent’s mistakes worthy of “hate”? In our text-rich world of social media one-liners that are sometimes the sum of one’s news consumption and then are repeated like gospel, these titles negatively stereotype parents and sway opinion. The negative portrayals of the older generation are prevalent—and hurt (read my article: Negatively stereotyping parents of estranged adult children: It hurts).

Other parent-blaming is more subtle and intellectualized. In some cases, the ideas may even apply. But even the smartest sounding blame can harm loving, heartbroken parents—and their troubled adult children who don’t learn to empathize or take responsibility for their own mistakes.

One New York Times article used a grabber headline to talk about what’s known as “attachment theory.” While attachment theory makes some sense, it is just as its name implies: a theory. Furthermore, it was conceived more than half a century ago. Our world and how we live in it has evolved (or, in some ways, devolved!). Lifestyle norms have changed. Also, the childhood behaviors attributed to caregiver styles in attachment theory may or may not translate to adult relational behavior as the article, “Yes, It’s Your Parent’s Fault,” seems to convey. So, why such a certain title? Negative stereotyping grabs eyeballs. Unfortunately, it also furthers generational division and fosters blame. At the very least, it’s irresponsible. It’s also too easy, same as blaming other people for one’s own mistakes.

The piece mentions interviews/questionnaires aimed at determining one’s dominant attachment style but points out that results may vary from one questionnaire to the next. The mismatch is explained away as resulting from the skill and training of the interviewer or a person’s level of self-awareness (or lack thereof!). My translation? If you want to blame your parents for your adult relationship problems, you can. These questionnaires may help.

The more light is shed on a problem, the more society becomes aware. That’s why I call attention to the way parents are frequently portrayed as overbearing, needy, nosy, or unbending. This portrayal is an unjust presentation that fosters ageism and promotes division. This disservice to older people can manifest in unhealthy ways when parents seek help after an estrangement occurs. This is discussed at length in my award-winning book, Beyond Done With The Crying: More Answers and Advice for Parents of Estranged Adult Children (2021). Beyond Done is a follow-up to my first book (also award winning) for heartbroken parents, Done With The Crying. I hope you’ll read both, and use the examples and exercises to work toward your own well-being.

Sometimes, our past experiences do influence how we interact with other people, including our adult children. As a parent with a long-term estrangement and in communicating with thousands of other moms and dads, my work centers on parents’ personal growth, emotional strength, and enlightenment. My work is specific to estrangement and how you may be affected in the various aspects of your family, work, and general life. Don’t stay stuck.

You spent a lifetime caring for children who are now adults. You can be true to yourself, remain open to the possibility of a healthy relationship if that’s desired, yet disengage from negative interactions or chasing behavior that steals your sense of dignity and makes you feel weak. You can hold out hope yet get on with your own life and enjoy the people who value you.

Society, theorists, and even ill-conceived billboards offering “effective counseling” may blame you, but you know the truth. You were there. Likewise, you’re here now. Take charge and make the most of your precious life. Start this minute.

Develop your natural resilience. Step into a freer, happier future.

Hugs to all the heartbroken parents,

67 thoughts on “Heartbroken parents: Are you to blame?”