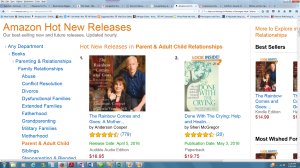 Occasionally, you find yourself rubbing shoulders with someone unexpected. It happened to me when my new book to help parents of estranged adult children came out the first week of May. To my surprise, CNN’s Anderson Cooper was right next to me. Well, technically, it wasn’t me rubbing shoulders. It was my book at Amazon.com.

On computer screens around the world, there is Cooper’s new release

. He sits with his mother on the cover of their memoir that explores enduring love between a son and his mom. Ironically, next to this there’s my book that shows a family tree with a bird flying away.  My my new self-help release

tells of mother and son estrangement.

Starting the week before Mother’s Day, both my book to help rejected parents move forward after a broken bond, and Anderson Cooper’s memoir of parent-child connection with his mother, Gloria Vanderbilt, have been featured as Amazon’s “hot new releases” in the parent & adult child category. A version of his book is still at number one. My paperback has fluctuated from #2 to 20. Often, regardless of its numbered place, it has been featured in the right-hand column, snuggled up next to his.

Has Anderson Cooper seen my book with its heartfelt reviews beside his with its more than 700 glowing comments? Despite the 600+ quantity difference, our reviews’ star level is about the same—but I digress.

As a writer with the touchy subject of parent-adult child estrangement that’s still a bit taboo, I’ve imagined my pretty book cover catching Cooper’s eye. He’d tilt his gray head inquisitively. What’s this? He’d click my book, and then he’d realize our shared “hot new release” and “mother-son” subject matter don’t make our books alike. He might be curious. Is it true there’s a trend of adult children who walk away from loving families?

People are often surprised to learn that approximately 25,000 parents come to my website to give and receive support each month. He might be astonished that more than 9,000 parents of estranged adults answered my survey for the book, Done With The Crying: Help and Healing for Mothers of Estranged Adult Children. And then he’d be hooked. He would go to the phone. He would call me for his show.

Each time I get to this part of my fantasy, I stop. He isn’t likely to call.

If Anderson Cooper does click over to my book, I imagine he’ll be struck by the contrast. Although he’d find similarities too. Both include tough social situations and pain as well as deep-felt love, but their overarching themes couldn’t be any more different. His memoir is based on strengthening the parent-child bond. My book is the bond’s unraveling.

Like many people do, he might start to speculate about the thousands of parents who, because they fear what’s often automatic judgment, keep private their personal despair. Instead of rubbing shoulders in social situations, those parents often hide away in shame. I know, because as the parent of an estranged adult child, I was once felt embarrassed, too.

As our books sat together, juxtaposed, Anderson Cooper likely wasn’t the only person who clicked on my cover, intrigued. By shelving my book for parents of estranged adult children next to a “hot new release” of such gargantuan popularity, Amazon shed light on parent-adult child estrangement, a shameful social issue that’s growing, and that one reviewer of my book said must “come out.” This serendipitous meeting brings awareness, and perhaps leads suffering parents to the restorative messages in my book. They can be done with the crying. There is help and healing ahead.