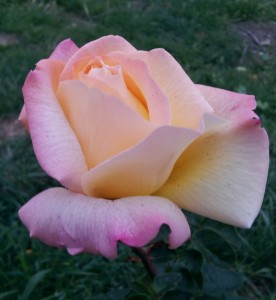 Roberta’s phone jangled its notification bell. A text on Mother’s Day? In a sudden state of dread, she pulled the annoying smartphone from her purse and saw the name—her estranged adult son. Roberta’s heart leapt, a physical betrayal to the reality she knew. What would he say this time? Empty well wishes on a tiny screen? Or worse, a slicing jab?

A familiar sinking sensation filled Roberta’s gut. For a moment or two, she contemplated squinting as she clicked it open, looking only close enough to call up the little menu and hit “discard.”

She let her wrist go limp, the smartphone feeling heavy in her hand. She’d open it eventually, she knew. But not right now. First she’d have to gather her strength.

Greetings from a stranger: your estranged adult child

Roberta is like many parents of estranged adult children who have shared their stories of leaping hope, mixed with a familiar dread. Her son still contacts her from time to time, but he isn’t the kind little boy she knew. He isn’t the teen she’d been so proud of. And the bits of the man she now sees only in snippets of text . . . well, she doesn’t know him. He has become a stranger.

Among the nearly 10,000 parents of estranged adult children to date who filled in my survey, approximately 46% replied “yes” to a question about whether they had ANY contact with their estranged adult child. Although not everyone used the box to “explain” as the question requests, those who did most commonly spoke of occasional texts or a card, usually associated with a holiday or birthday.

Sometimes, the contact comes on Mother’s Day, with the phrase “I love you,” or hugs in kisses in type: “xxoo.”

Often, parents describe how their hearts leap with hope at these periodic points of contact. They often respond, too—and then endure days of agonizing silence, unanswered.

After a few of these emotional roller coasters, parents may start to use words like “obligatory” and “generic” to describe the greetings from a son or daughter they no longer know.

Sometimes, the texts start out friendly enough, but then resort to backhanded slaps:

Sometimes, the greetings that fill parents with hope, are later understood as veiled attempts to fulfill a need. Parents say that several texts, maybe even a brief call or two get spread out over several days, preceding a request for money or some other assistance.

Some parents oblige. In my book, Done With The Crying: Help and Healing for Mothers of Estranged Adult Children

, Vicky recalls with clarity the way her daughter first rejected her. Her daughter had volunteered to bring the cake to Vicky’s 61st birthday party. “There I was waiting in my front room with pink paper streamers strung all around,” says Vicky. “Danielle’s siblings were there, a few neighbors, and even my pastor’s wife. Then I got the text.”

The pain of hope made Vicky vulnerable. But after nine long years, she made a change. At age 70, she tells other mothers not to wait so long to get on with their lives.

Roberta wishes things were different with her estranged son. She’ll read the text, and maybe even reply. But she’ll do it on her own time. After she’s had a good meal and enjoyed the day as she’d planned to—with her daughter who remains close, and a friend who is all alone on Mother’s Day. Maybe she’ll open the message in their presence even, with support from people who know—just as Roberta knows deep in her heart, and is proven by lovely memories of all the good she has done—that she was a good mother.

Or maybe she will delete it. Her daughter would tell her she had the right. Anybody who cared about her would. But Roberta still holds out hope. Even so, she won’t let it hold her hostage. She won’t sit around and cry any longer.

No matter what choices our adult children make, their behavior does not diminish the good we did or continue to do in ours and others’ lives.  Someone’s inability to see our value does not detract from our worth. Value yourself.

If you find yourself sitting around waiting for a text or call on Mother’s Day or some other special day, think of Roberta reading her son’s message on her own terms. Think of Vicky with her advice. You don’t have to give up hope, but you can be in charge of yourself and your life. You count.

Six Ways to Get Through Mother’s Day

What am I if I’m not a mother? 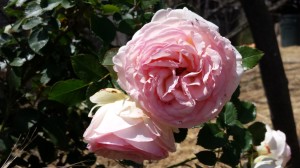 Here it comes again—Mother’s Day in the United States and in Canada. Mothers of estranged adult children in the U.K. have already seen Mother’s Day come and go. Soon, mothers in Canada and in the States will be on the other side of the holiday too—until next year, when it rolls around all over again.

Hang in there. Mother’s Day won’t stop coming just because we’re estranged. And having spoken with thousands of parents who’ve been cut off by adult children, the reality is that the situation may not be ending for you anytime soon either. That’s why it’s so important for you to adapt.

Since starting this site, I’ve written a few articles about getting through Mother’s Day when adult children are estranged. You’ll find in them practical advice and concrete tips. You’ll also find comments from mothers of estranged adult children who share their experiences, and acknowledge the emotional pain.

In this article, we’ll focus on Mother’s Day from an emotional triggers perspective. 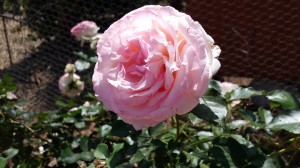 Mother’s Day, like any time when we’re particularly reminded of an estranged adult child and the relationship we used to share, can trigger an onslaught of feelings. While it’s helpful to acknowledge the pain, it’s also easy to slip into a looping circle of thoughts that bring us down. Everyone else is having fun, and I’m sitting home alone. What did I do to deserve this? This is so embarrassing. Nobody understands.

Each of us has our own personal version of woeful thoughts. And scrolling through Facebook with its stream of happy family shots might fuel the feelings behind them. Protect yourself if you need to.  Just as social media can push emotional buttons, going to a brunch on Mother’s Day when you’ll be surrounded by families also might not be helpful either. Do you have other adult children or family who want to take you out? Remember, this is your day. You get to choose! Take care of yourself.

What else might make you feel sad or lonely? Make a few notes of what will hurt or help–and then be proactive. Mother’s Day when your adult children are estranged is similar to other times that are particularly hurtful because they remind you of loss, stress, or grief. In my book, Done With The Crying: Help and Healing for Mothers of Estranged Adult Children, in one story, Julia misses her only son. They were very close, and in the early mornings, he used to call her daily to chat. Julia had come to expect those calls. So after the estrangement, she would stare at the silent phone. Time gaped, and she felt horribly alone and sad.

Before her son walked away from the family, Julia’s mornings revolved around those calls. Their chat sessions had become part of her routine. They connected her to her son, and to the life they shared. But post-estrangement, Julia learned to adapt. Using one of the tools in the first chapter of the book, the first step toward her healing was to alter her routine. Looking at her phone each morning, wishing it would ring, only reminded her of what she’d lost.

Just as mornings were particularly difficult for Julia, Mother’s Day can prick up the feelings of loneliness and rejection that are common with estrangement from adult children. For some it’s a particular song. Others might be bothered by a particular sporting event, or other recreation. Even if you don’t realize why, you might find yourself overeating, grousing at the cat, or having troublesome dreams. The feelings or behavior may be related to emotions triggered by a holiday like Mother’s Day, or another personally significant day.

While I’m past the pain of estrangement, certain places and activities do remind me of my estranged adult child. Eating strawberries makes me think of him—he’d choose them over any sugary dessert. And a nearby street never fails to remind me of him. Memories are attached to those things, so it’s natural the mind connects them to someone who was once so much a part of my life.

Does that mean I’m sad? Not anymore. I’ve come to think of those triggered memories as hiccups. Like some of the other mothers whose stories are shared in my book, I’ve worked through the pain, and moved beyond it. Recognizing those triggers, and then taking action to make new routines can help.

Stepping forward: Be good to yourself

There’s no set schedule to moving beyond emotinonal pain. There are only steps, big or little, that move you forward. Whatever you do, don’t get down on yourself. Acknowledge your feelings so you can deal with them. Remember the utter shock you felt when your son or daughter first cut you off? Don’t think of triggered emotions as setbacks. They’re aftershocks—a normal occurrence that relieves pressure. Pat yourself on the back for accepting where you are right now, and for recognizing that in coping mindfully like Julia, you’re healing. Think: Forward. I’m adapting. I’m moving on. 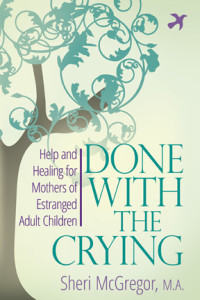 Like Julia and other mothers whose stories of estrangement from adult children are shared in Done With The Crying: Help and Healing for Mothers of Estranged Adult Children, you too can heal. Mother’s Day doesn’t have to be a bad trigger day. You too can be Done With The Crying.
352 pages, May 2, 2016
ISBN: 978-0-9973522-0-7
Available through popular booksellers–ask your local bookstore to order it for you (but prepare for delays–it’s so new it might not show up in their systems yet). Or order online.